A chemicals company has operated a German facility for the production of chemical substances since 1949; they included lindane between 1954 and 1972.

Byproducts of the manufacturing process were various isomers of hexachlorcyclohexane (HCH), of which only γ-HCH was sold due to its properties as an insecticide. The other residues (mainly the isomers α-HCH, β-HCH and in places δHCH) were originally used as construction material in delimited areas of the plant, where they raised the upper edge of the terrain. But construction activities in the following years led to shifting and carryover into the adjacent soil.

More recent eco-toxicological and toxicological insight has since indicated that these substances are not suitable for use as construction materials. In response, some of the packing was removed from the plant and replaced with clean materials.

Over 10,000 t of soil with HCH contamination levels of up to 10,000 mg/kg HCH (measured as EOX) and a calculated chlorine content of as much as 1% were transported to the thermal treatment facility at ARE Deutzen GmbH.
HCH possesses a strong and unpleasant odour, so the emissions caused by degassing and the formation of dust were minimised during intermediate storage in special buildings with air extraction. The soil treatment by means of thermal desorption permitted downstream use of the purified soil as construction material during building work at landfill facilities. 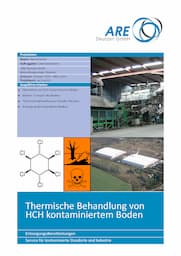