Remediation of the Le Letten landfill

The former Le Letten landfill is situated in Hagenthal le Bas Valley in Alsace (F), roughly 300 m from the Swiss border, near Schönenbuch in the canton of Basel-Landschaft (CH). It was used in the 1950s and 1960s to store excavated soil, as well as commercial, industrial and chemical waste.

GIDBR commissioned HIM GmbH with remediation of the former landfill site Le Letten.

A central component of the remediation project was to dispose of the contaminated landfill contents.
These heterogeneous materials were described as a ‘mixed layer’. Based on the original volume estimate, the total quantity of mixed layer material was to be around 20,600 m³ (= approx. 35,000 t).

Moreover, depending on the degree of contamination, the soils located immediately beneath the mixed layer material in the adjacent alluvium needed to be excavated and disposed of. The volume of this material at the base of the landfill and in the boundary areas was estimated to be approx. 3,000 m³ (= around 5,100 t).

The HIM GmbH disposal concept included decontamination of the mixed layer material and the alluvial soil in the thermal soil treatment facility at ARE Deutzen GmbH in Deutzen/Saxony, Germany, depending on the degree of contamination.

The entire deposit was enclosed within a structure and an external company removed the soil. It was then placed in an airlock, fed into containers and transported for thermal treatment at the facility operated by ARE Deutzen GmbH near Leipzig.

Transportation of the material from the Le Letten landfill to Deutzen took place in ‘inter-modal’ (road-rail-road) gas-tight containers in order to comply with the facility’s acceptance thresholds. 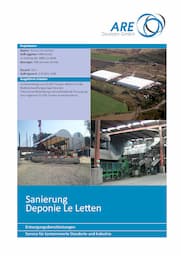