Remediation of a Former Textile Processing Plant in Leipzig

An investigation of contaminated sites on the grounds of the former textile washing facility in Leipzig identified two pits that were filled with PER sludge and that had been dug specifically for this purpose. Infiltration of precipitation water, coupled with the absence of surface sealing, had led to a continuous leakage of pollutants from the pits and into the ground water close to the surface. Additional preliminary analyses revealed a highly elevated risk that the chlorinated volatile organic compounds might degrade into the toxic breakdown products cDCE and VC in the areas of the PER sludge pits.

The remediation project also involved removal of the PER sludge and their solvent contents, which had accumulated as waste at the Leipzig textile processing factory and that had been buried/tipped at several points of the property and were now present as PER sludge/soil mixtures and free cDCE phase.

Chemical analyses revealed contamination levels around the PER sludge pits to be approximately 11,000 mg/kg cDCE. It also became apparent that the packing material without PER sludge infiltration was highly contaminated with solvents. The verified cDCE concentration ranged between 100 and 2,000 mg/kg

Extensive measures were put in place in the area of health and safety due to the significant risk potential. All supervisors working at the building site were required to present BGR 128 certification. Industrial employees completed their work wearing breathing protection; the building machinery was equipped with filter cabins and the organisation of technical safety was overseen by the external stakeholder SiGeKo.

Extensive preparatory and clearing work was performed once the site had been set up and occupied. The excavation area, which fell precipitously down toward the Weißer Elster river on the eastern fringes of the property, was secured using sheet piling.

The contaminated material was excavated using conventional building site machinery. A 20 t hydraulic digger was deployed to remove sludge and mixed sludge/soil and place it in the buckets of the assembled wheel loaders. They then transported the material across the grounds to the gastight ARE containers, which were sealed immediately after filling and therefore keeping the emissions at an extremely low level. Intake and discharge ventilation systems were also installed to minimise the nuisance for the local residents.

Once filled, the gas-tight containers were transported from the transhipment point on hook-lift vehicles. The lion’s share of the accumulated waste was recycled at the ARE Deutzen GmbH thermal treatment facility in Deutzen. A small, less contaminated portion of the soil was treated using microbiological methods.

Pump sumps were used to direct gathering water into stacked containers, from where it was taken for chemical-physical purification in suction trailers.

An inspector oversaw all of the services. Together with in-house monitoring, the material was classified according to organoleptic principles before and during the work. The disposal channels and remediation limits were defined by means of declaratory analysis, as well as base and boundary analysis. 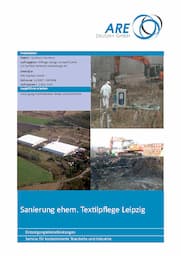