The grounds of the former mineral oil plant ADDINOL Lützkendorf is situated on the southern reaches of the mining region of Geisel Valley in the district of Merseburg-Querfurt. The complex lies adjacent to the town of Krumpa in the southwest. The bitumen storage basin belongs to the old facility in the former mineral oil plant. The filling stations that were once part of the complex were almost completely destroyed during the Second World War. The ‘basin’ this created was later used to introduce propane bitumen, sometimes containing foreign matter, which was then stored there in a largely solid state.

Investigation revealed that the basin contained bitumen, acidic resins and activated earth (hardened paraffin and slack wax resins). Building rubble detritus was discovered at the base of the pit. Sandy packing material, mixed in places with bitumen deposits, formed the lowest level of sedimentation.

The emission control analysis assessed the potential hazard to humans and the environment based on the following parameters: organic substances as total C, BTEX with potentially high toxicological impact, SO2, odour, dust and H2S.

The chosen remediation solution was defined as ‘Decontamination of the deposits by complete removal of the waste substances, their disposal, repacking of the hollowed pit with suitable mineral materials and protection of the hollowed pit against recontamination from the adjacent, not yet remediated areas by temporary covering of the repacked zone.’

ARE Deutzen GmbH teamed up in a consortium with Bilfinger Berger Umwelt GmbH and GICON GmbH and was commissioned to plan and complete remediation to achieve the defined objectives.

Extensive measures were put in place in the area of health and safety due to the significant risk potential. All supervisors working at the building site were required to present BGR 128 certification. Industrial employees completed their work wearing breathing protection; the building machinery was equipped with filter cabins and the organisation of technical safety was overseen by the external stakeholder SIGEKO.

Conventional methods were used to excavate the bitumen, namely industry-standard civil engineering equipment (30 t hydraulic diggers). Extraction took place through all layers to the base of the sedimentation due to the temperature-dependent consistency and integrity of the deposited masses. Conducted during digging, organoleptic diagnostics were used to perform an initial separation of bitumen from acidic resins and mineral substances.

The excavated bitumen was placed in trailer trucks and then taken for recycling. The in places thixotropic properties of the bulk material meant that it solidified during transport. Precautionary measures were taken to accommodate this process by greasing all of the cargo spaces before they were loaded.

After successful extraction and disposal of the waste substances, the next step was to fill and compact the hollow pit layer by layer using materials that were typical of the location. Topsoil consistent with the environment was placed on the surface and then cultivated, so that the location now slips seamlessly into the landscape of the Geisel Valley Lake. 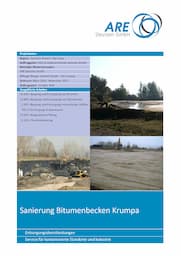