Remediation of the Tri Dump, Stadtallendorf

The Tri Dump was the residue landfill used for the decades of explosives production at the site in Stadtallendorf, Hesse. While the nitroaromatic compounds contaminating the soil in today’s town mainly presented a risk to the residents, the water leaking from the Tri Dump in particular was a serious danger for the ground water and hence the supply of drinking water in the region. Besides other nitroaromatics and aromatics, the high levels of toxic mono-nitroaromatics were especially critical.

Around 50,000 tons of gypsum neutralisation sludge was stored at the Tri Dump. Boundary embankments, covering and subsoil yielded around 40,000 t of contaminated soil that required thermal treatment. The contamination levels encountered during remediation by far exceeded the values identified during the contaminated site exploration, with nitroaromatic content even rising as high as 60,000 mg/kg.

The soils removed by an external firm inside a building structure enclosing the entire deposit were placed in an airlock system, fed into containers and then transported for thermal treatment at the ARE Deutzen GmbH facility near Leipzig. The excavated production sludge was classified at a depth of 50 mm and introduced into a specially planned and designed conditioning facility using thick matter pumps and a pipe system. The sludge was extracted from a silo and conditioned in a mixing system using bonding agents. Only once it had been conditioned was it possible to transport the sludge for thermal treatment, also in Deutzen, in gas-tight containers that had been specifically created for this project. After filling, the containers were placed automatically on conveyor belts and sluiced out of the facility, put in place using a twin-boom gantry crane and then loaded onto trucks.

The conditioning system was approved pursuant to Point 8.11(aa) of Section 4 BImSchV. It was subject to special requirements in regard to explosion protection. Catalytic-thermal waste air separation was subject to Section 17 BImSchV. Regular, individual measurements were taken to monitor the waste air continuously. A DeNOx system was operated to counter the high nitrogen contents in the nitroaromatic compounds. Multiple redundancy was ensured for virtually all of the relevant systems. The conditioning system was installed in a lightweight structure that was kept permanently at negative pressure. This method was selected to deal with the toxic and highly odorous emissions of gas from the material. Even after conditioning, special high-security storage facilities needed to be built at the facility in Deutzen to deal with this factor. These facilities have a capacity of 20,000, i.e. 30,000 tons and are erected as autonomously ventilated encasements with their own airlock system within the ventilated thermal treatment building . Nonetheless, the odours only became tolerable when additionally sprayed with special deodorant. The high water content of the sludge presented a stiff challenge to the thermal treatment facility. Recycling of the treated material was only possible based on substance-specific, single-case approvals due to the highly sensitive origins of the material and the inconsistent existence of thresholds for nitroaromatic compounds outside of Hesse. 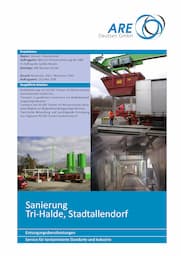