WE HAVE BEEN REMEDIATING THE CONTAMINATED SITES OF THE SPECIAL CONTAMINANT LANDFILL 'GROSSE HÖLL' IN ZICHOW SINCE 2015. COOPERATING WITH OUR ARGE PARTNER LOBBE, WE HAD EXCAVATED AND DISPOSED OF AROUND 75,000 TONS OF DEPOSITS BY THE END OF OCTOBER. A TV STATION HAS NOW BROADCAST A REPORT ABOUT THIS EXTRAORDINARY REMEDIATION PROJECT.

The current special contaminant site Große Hölle is situated directly adjacent to the B 166 main road, between the towns of Passow and Zichow in the northeast of Brandenburg. Originally it was a depression measuring around 10 to 15 metres in depth and a covering an expanse of 16,000 m² in the high plains of Pomeranian Uckermark. From 1964 onward, the special contaminant landfill was used to dispose of oily soil, although a broad range of contaminated residues were stored there later on as well, for instance chemical substances, solvents, paints, plant protection agents and residues from crude oil refineries. The materials were placed there in a solid, pasty and liquid form, sometimes in barrels. Inflowing rainwater created a pond in the landfill with a layer of oil floating on its surface. The contents of the landfill were incinerated around seventy times up to 1990 in order to make full use of its capacity.

Following years of planning, ARGE Sanierung Zichow was commissioned with the clearing and renaturation of the large landfill in spring 2015. Originally, just under 50,000 tons of landfill, liquid and solid waste, soil and rubble from hot spots were selected for extraction and disposal. Contaminant concentrations in the waste material were around 228,000 mg/kg mineral oil hydrocarbons, 95,000 mg/kg PAH, 2,600 mg/kg BTX, 12,000 mg/kg sulphur, 4,000 mg/kg chlorine and 15 mg/kg mercury. Based on current estimates, 75,000 tons of waste will have to be excavated from the Ice Age hollow.

Due to the complex characteristics of the deposited materials, the pasty fractions are conditioned with ash on the building size and made ready for transport. The waste is taken to the disposal facilities run by the ARGE partners and treated there, depending on the properties and contaminant concentration. Once the waste has been cleared, the site is renaturised, turning the ‘black hell’ into green. 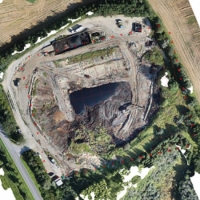